Midas supplies groundbreaking audio for the man who changed the world

A trio of Midas consoles provided by Britannia Row Productions was used at a charity concert commemorating the 80th birthday of Mikhail Gorbachev at London’s Royal Albert Hall. An XL8, a PRO6 and a Heritage 3000 handled FOH from three adjacent boxes overlooking the star-studded event, while a second XL8 provided onstage monitor duties. Broadcast feeds were also provided as the event was being recorded for Russian TV.

Celebrating the former Soviet leader’s life from childhood through to high office, the reforms of Perestroika, his international peace efforts and the charitable work of the Gorbachev Foundation, the event relied on Midas’ networking abilities to facilitate its smooth running. As well as numerous guest speakers and VT playback, many artists from East and West performed in an evening hosted by Sharon Stone and Kevin Spacey and attended by a long list of international high profile VIPs.

Artists included Bryan Ferry, Shirley Bassey, Katherine Jenkins, the Scorpions, Paul Anka, The London Symphony Orchestra, Maestro Valery, Gergiev Bolshoi and Mariinsky Soloists, the Igor Krutoi Turetsky Choir,  Andrey Gavrilov and more. Richard Sharratt took care of the orchestra from the XL8 while Tom Howat set up show scenes for all the bands on the PRO6 and looked after their FOH engineers. The H3000 was supplied for the exclusive use of the Scorpions. 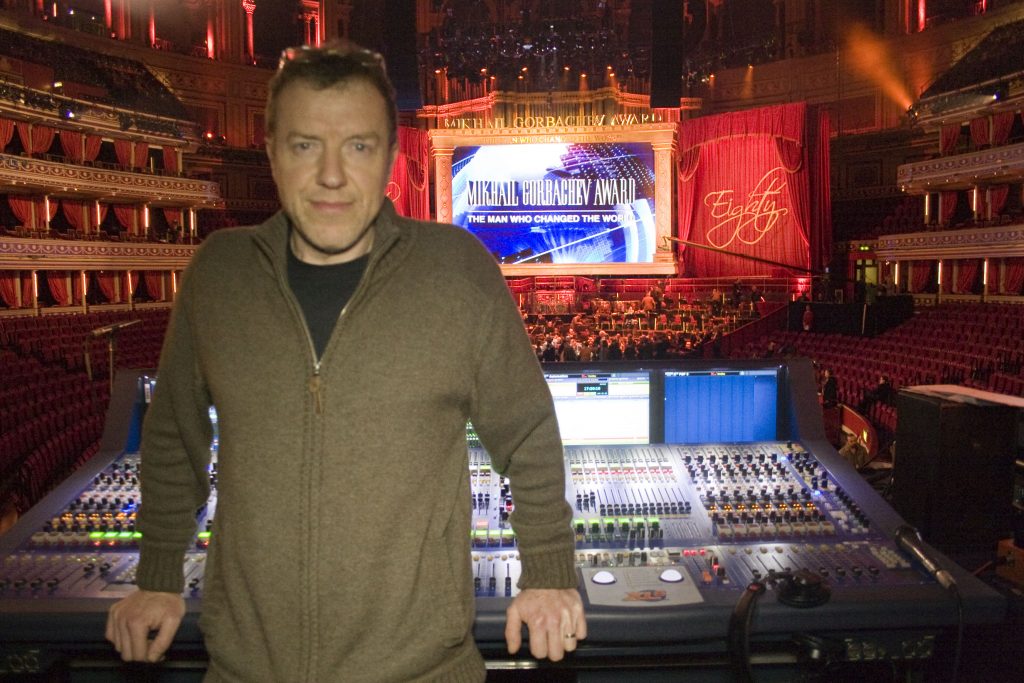 Sharratt and Howat created an AES50 network by linking the FOH and monitor XL8s, and connecting the XL8 and PRO6 at FOH with CAT5 cables. This allowed audio from any input to be patched through to any console, and anywhere else in the network. A Midas DL451 modular I/O box was located next to the Heritage 3000, and outputs from the analogue console were patched into this for networking into the PA. There were two further DL451s at FOH for local connections to the XL8 and PRO6 respectively, while a fourth DL451 on stage provided orchestra stems to the broadcast trucks.

“I could pipe sound from any desk to any desk down the network, and we quite simply couldn’t have done this particular show without it, as it was extremely busy, with lots of last minute requests from production and only one day of rehearsals,” says Howat. “The Midas consoles worked brilliantly, and there were none of the occasional problems that one can come across with networking; it really came into its own and the network worked a treat.”

Howat reports that all visiting engineers were pleased to find a PRO6 was available to mix their bands on. “Bryan Ferry’s engineer, Nick Warren, had just discovered the PRO6 and was extremely pleased to see it there,” he says. “Paul Anka’s engineer from the US was also delighted to see it and I gave him a quick lesson on rehearsal day and he picked it up very quickly. A couple of the Russian engineers who weren’t used to driving it also learned fast. As an engineer it’s great to show someone how quick it is to get to know. Because I handled all the scene processing they didn’t even have to think about that, they let me get on with the tech side of it and they got on with mixing their numbers.”

In the adjacent box, Richard Sharratt mixed the orchestra, which provided backing for the majority of artists, on the XL8. He used the system’s POP(ulation) Groups to break the orchestra inputs down into different sections: high strings, low strings, woodwind, brass, percussion etc, and assigned VCAs to various sections of the orchestra. “We were providing stems for monitors and broadcast, so that left us with three stereo groups for the orchestra – high strings, low strings and everything else, plus two mono vocal groups, one for presenter handhelds and one for lectern mics,” he explains.

Adds Britannia Row director Bryan Grant, who was in the audience on the night, “The Midas consoles performed flawlessly, networked beautifully and sounded fantastic as always; a great result.”

All proceeds from the event will be shared between the Gorbachev Foundation and Macmillan Cancer Support.