d&b on tour with Taylor Swift

Thanks to Guto Monteiro for supplying us with this story and fantastic photos! 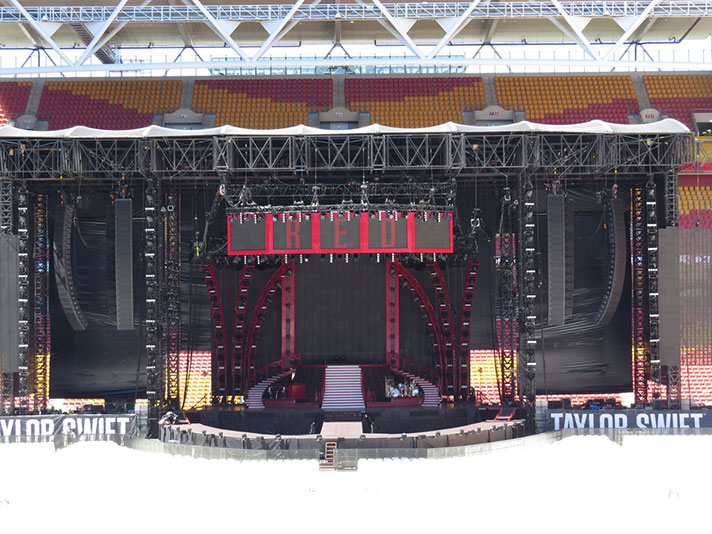 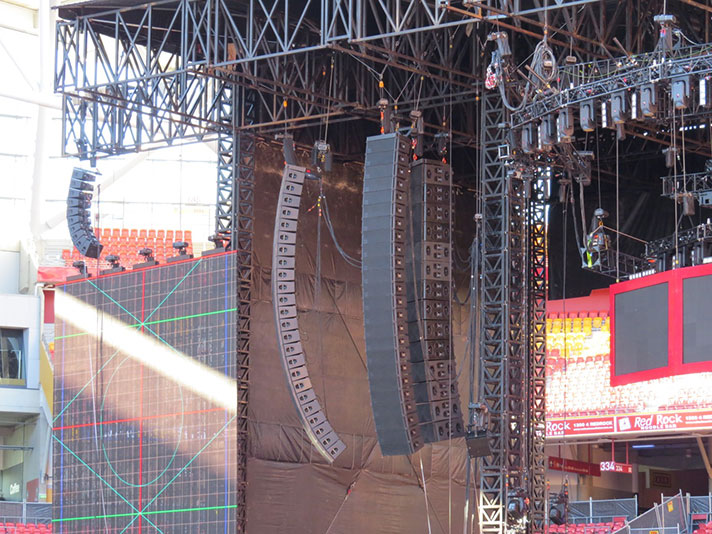 8th Day Sound out of the USA is the audio supplier worldwide and they contracted JPJ Audio on the Australian tour. Guto was instructed to prepare the equipment exactly the same as the d&b audiotechnik J rig they had been using in the United States.

Guto reports that it wasn’t a particularly loud show but it sounded really fantastic – “the average SPL was 103dB at front of house and the coverage of the system was truly superb”. 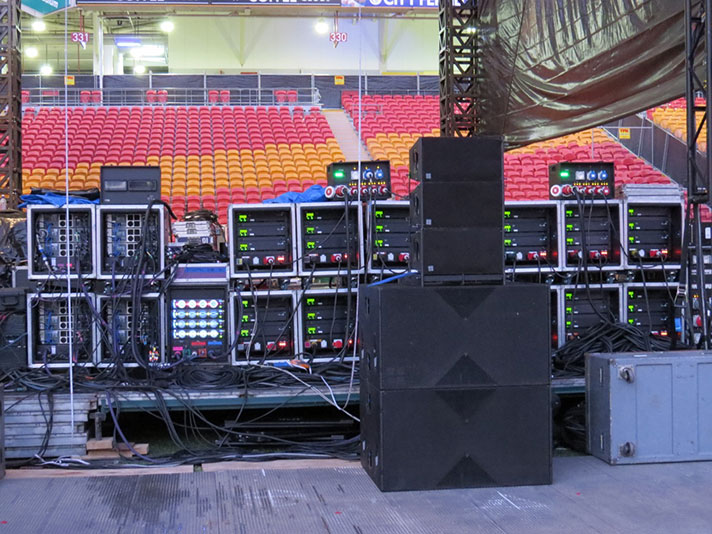 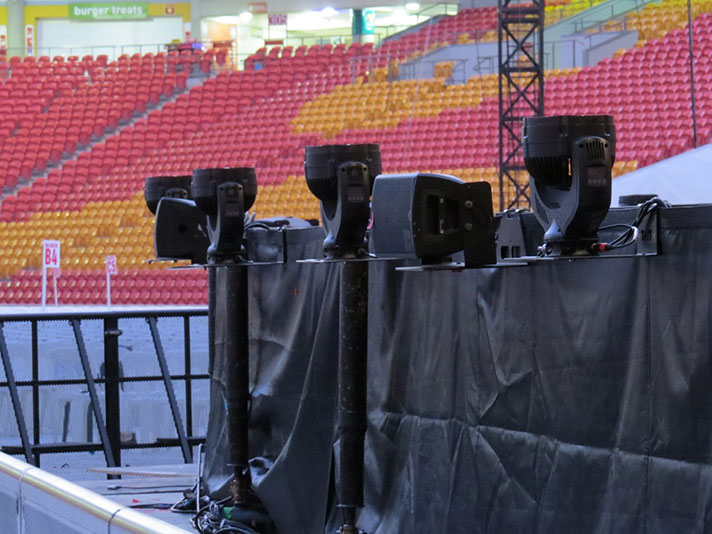 We believe it was the biggest d&b stadium rig ever used in Australia consisting of: 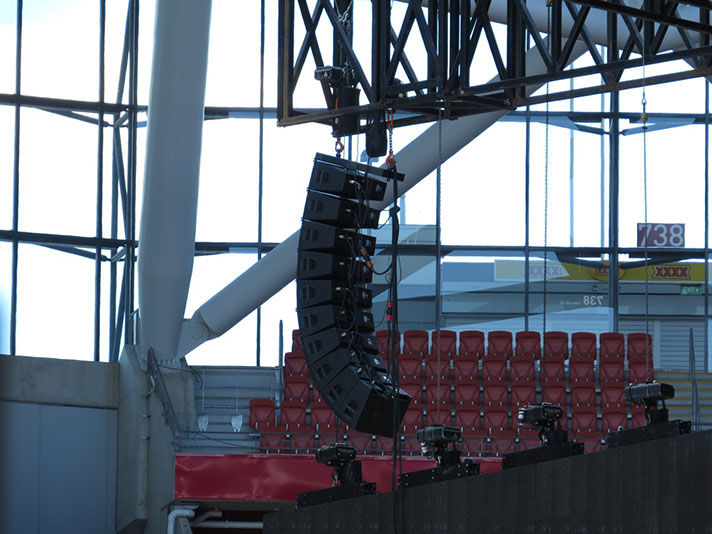 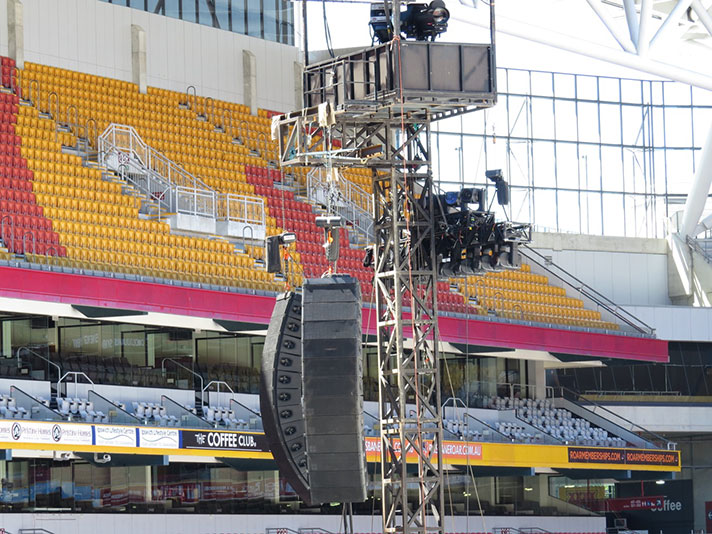 There were 11 audio techs, including engineers: 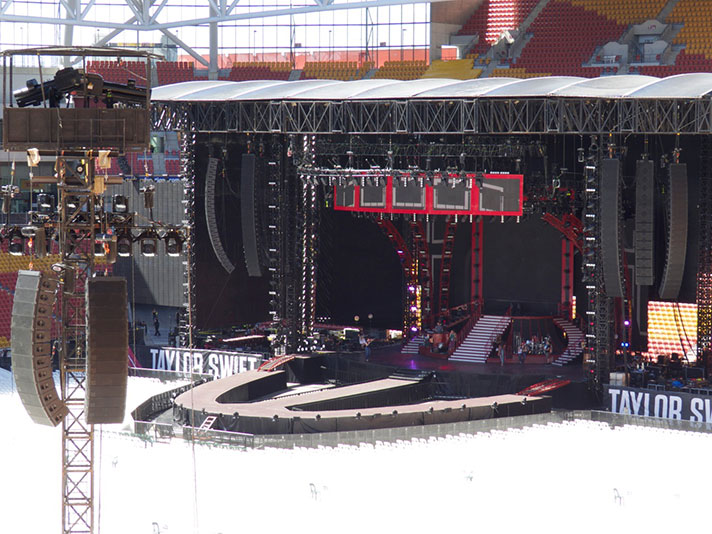 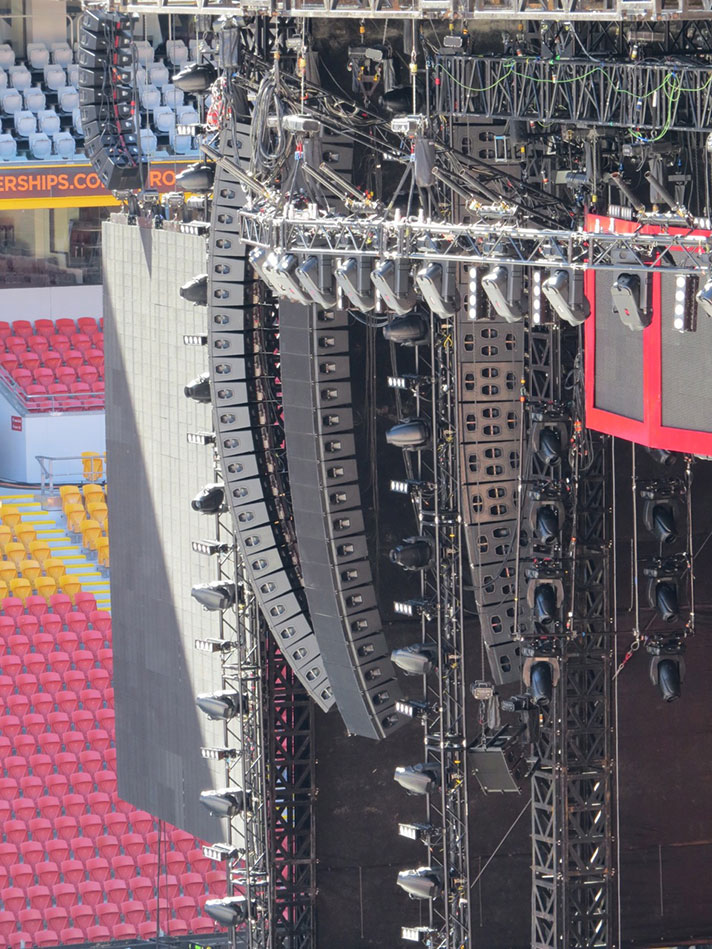 Guto flew one side of the PA (Stage Left) and joined Ed Verta, the tour systems engineer to check and time align the system.

“We had three trucks for PA, delays and control. The main arrays were up and connected in just over 2.5 hours!” 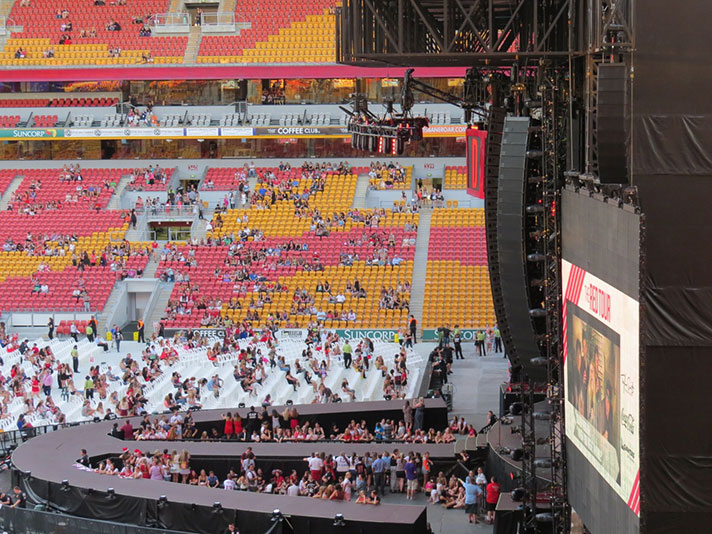 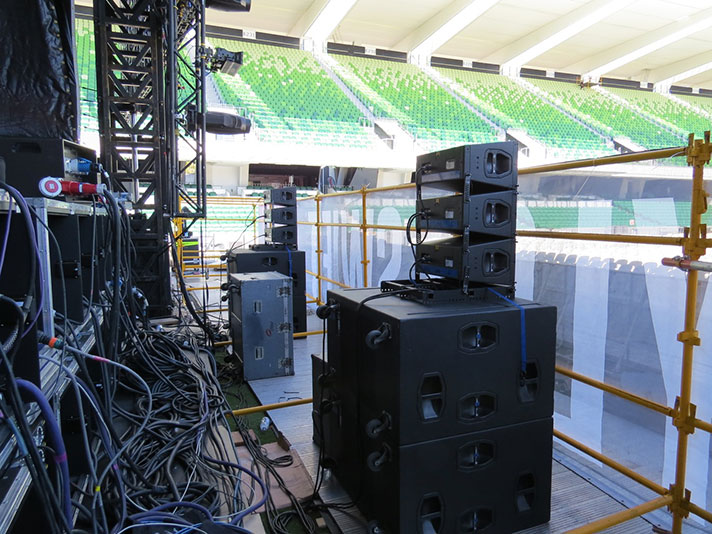 Guto mentioned “24 x J’s on each main and each side arrays plus 14 x J-SUB’s per side is the perfect stadium rig, these are the maximum quantities you can hang per flying frame.
Verta said that it took a few configurations before finally settling on this one.” 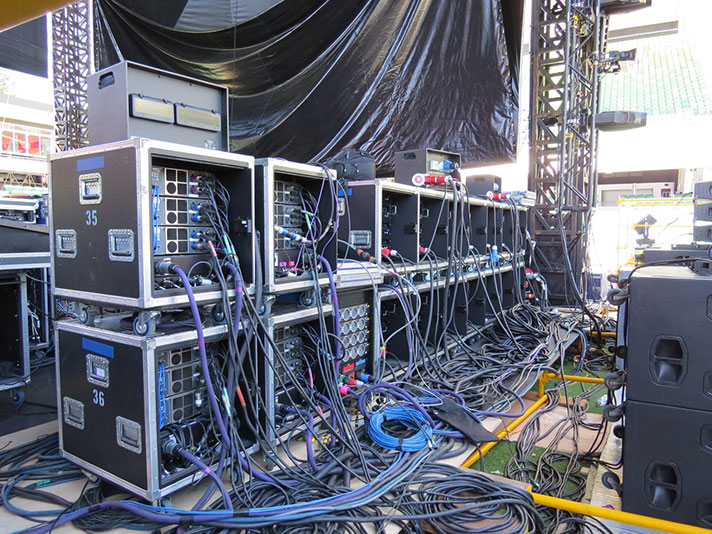 “According to Verta and David Payne, FOH Engineer, the J-SUB’s behind the main array at 30 degrees off stage is the best configuration they have achieved.” “The low frequency response at the very top seat of the stadium was the same or perhaps better than what we had on the floor. For instance, at Etihad Stadium the distance between the stage and the very top row of seats is approximately 160 metres.” 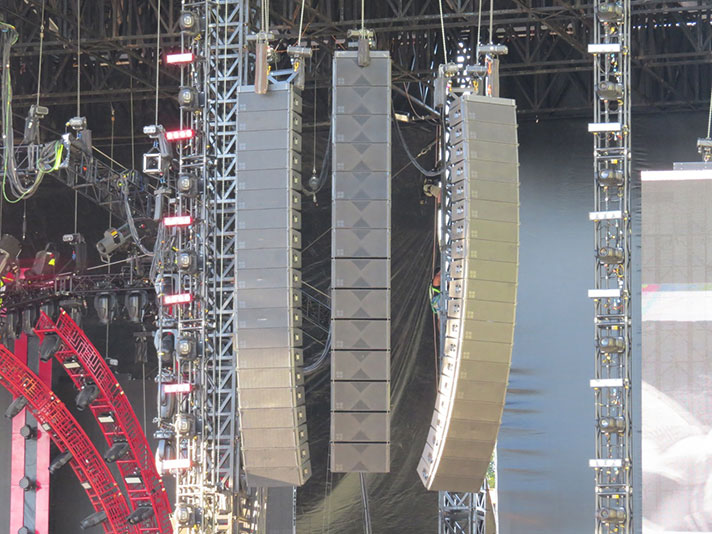 The top 7 x J-SUB’s are close (0 degree) and bottom 7 opened (2 degrees) which made the low frequencies throw further.

“The V series cabinets were a little far from the side hang but worked extremely well, everyone in the crew was impressed by the performance of the V arrays.” 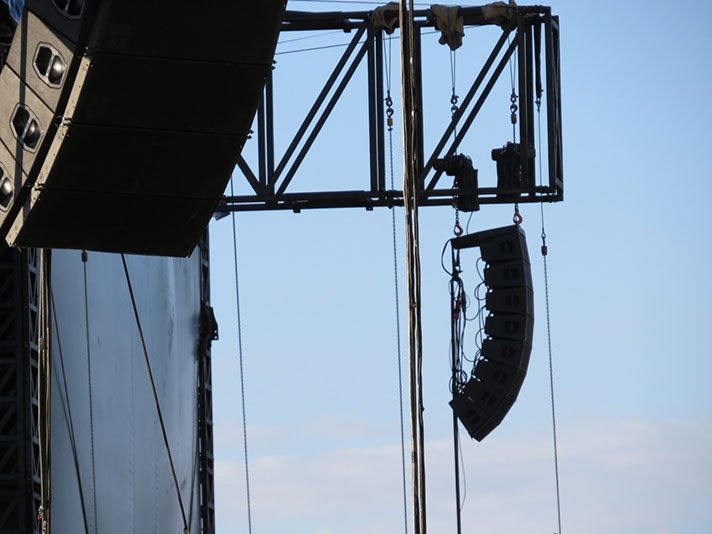 Guto continued, “Initially 12 x J-INFRA’s didn’t seem to be the right number for a stadium gig but I can say that they pushed a lot of air and sounded great!”

“Phil Boutle was one of the four JPJ techs on the tour, he worked for Britania Row for many years and he was very happy with the coverage and response of the d&b rig”. 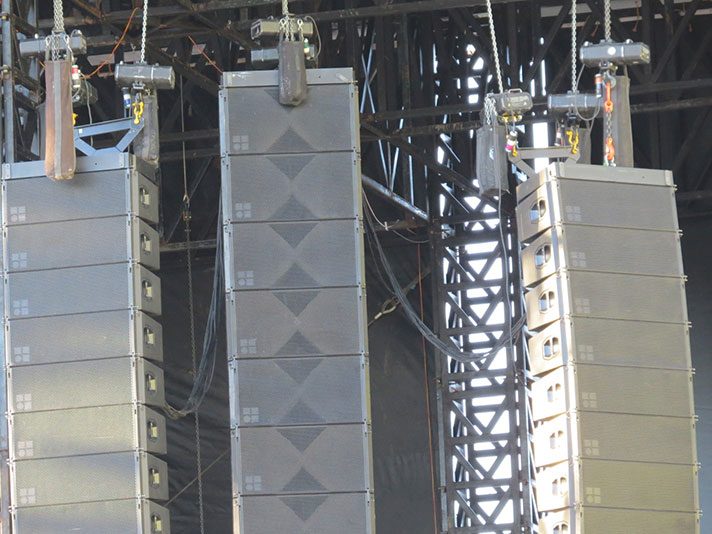 “I have used the J-SUB’s beside the main array many times. It works well if you have it hanging straight or at 45 degrees off stage. But having it between the two hangs at 30 degrees off stage was very impressive.” 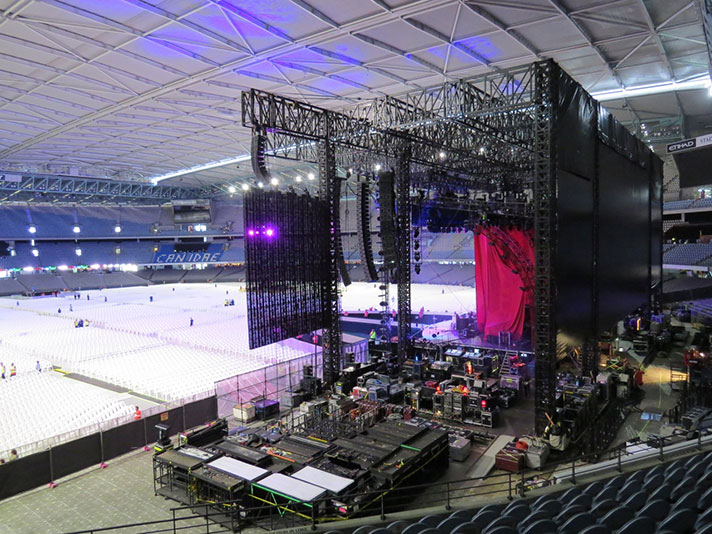 Guto continues, “The time alignment and tuning took around 50 mins, the phase response of the d&b is always awesome, which makes the whole process smooth.

David Payne said that the best part of the d&b system is that it brings you no sound complaints, every seat is covered and everyone goes home happy.”