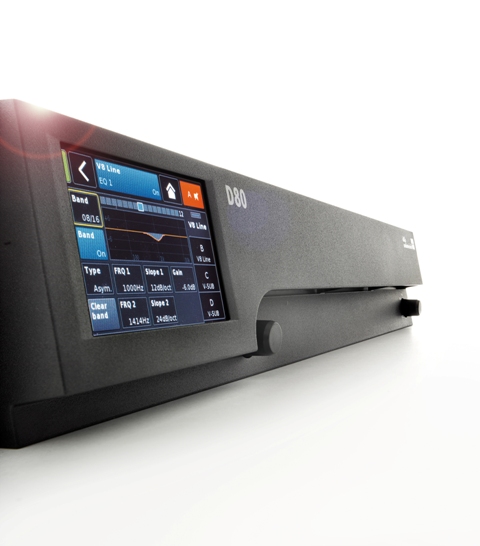 Until this, d&b audiotechnik has powered its entire range of PA cabinets with either of just two amplifiers, the D6 and D12. The D6 isn’t suitable for some of d&b’s systems, while the D12 caters for them all.

Now a new flagship amplifier has been released, called the D80, and again like the D12 it contains configurations for all d&b loudspeakers and a linear mode, however the specs from that point on are a very different read. For example, the 3RU D12 offers 2 channels of 1200 watts into 4 ohms – the 2RU D80 gives you 4 channels of 4000 watts into 4 ohms.

As you’d expect the D80 has a swag of DSP functions for system design and the boffins at d&b tell us that one consideration behind the 2RU design was to provide enough front panel real estate for a decent-sized TFT touchscreen. They also put extra effort towards the D80’s power supply.

You can quickly compare all three amplifiers at www.dbaudio.com and there’s a D80 video presentation that won’t be winning any Oscars anytime soon. A nice change from much of the new NAMM stuff – which is often announced, but not actually available yet – stock of the D80 exists in Oz right now.