I’m lucky enough to freelance for a bunch of different companies, all of whom use different equipment. That said, my previous involvement with d&b has extended only so far as walk-in gigs using other peoples J line system. Given most of my work is as a monitor operator, I was understandably interested to see if their wedges were as good as their big FOH systems.

The MAX monitor is a marine ply cabinet weighing in at 26kg. On paper this seems a bit on the lightweight end of the scale, considering it houses a 15″ woofer and 2″ compression driver in a co-axial configuration. Our test cabinet had a top-hat fitted at one end to allow pole mounting. Various other mounting options are available, allowing the cabinet to be used for purposes other than a stage monitor. The drivers are protected with a punched metal grille, which has a removable layer of acoustically transparent foam (microcell?) attached with velcro. Owing to the driver configuration the nominal dispersion angle is 60 degrees with a conical pattern – quite reasonable for a wedge.

Power handling spec is 250W RMS, and frequency response is listed as 55Hz-18kHz +/-5dB with floor coupling. It doesn’t exactly read in an exciting manner until you get to the SPL spec, when it gets interesting. Maximum SPL on the MAX monitor is 131dB when running from a D6 amp in passive mode. Use a bigger amp and run active mode, and this rises to 136dB. That seems rather loud.

Like all d&b, the MAX monitor requires d&b processing and amplification. Potentially pricey if you don’t already own d&b amps, but it means the MAX will always work exactly the same way every time you use it. I like predictable monitors a lot. Connections are more standardised with NL4 in and loop out.

Enough looking at specs though. I had a wedge, I had a D6 amp, I had cables, and it was time to see how it worked when used in the anger that only a foldback operator can muster. I plugged it in, switched it on, and sent some signal from an SM58 – a pretty common vocal mic. With no EQ applied (or even in-line) the MAX produced vocals which were clear, present and punchy as hell. Sonically it seems very different from the d&b arrays I’ve used, with less emphasis up top. There’s definitely a bit of a push around the mid range area. I tried an e935 and a d:facto as well and achieved very similar levels as with the 58. 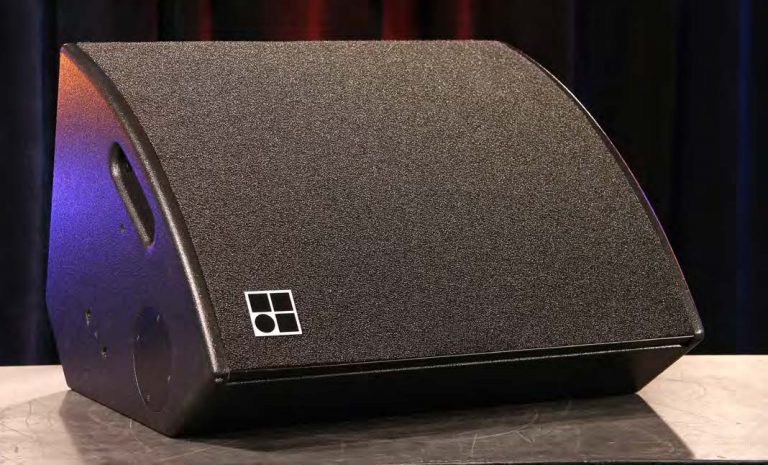 I turned it up, and up, and up. The MAX got louder and louder but nothing else changed. I continued the process until eventually it started to feed back, at which point I moved the box back a few metres and pushed some more level into it. Even with increased distance it didn’t really sound any different. I added some track to the mix at fairly high level, and vocal still punched through this with no problems. One thing I noticed with the track running was a very obvious roll-off in the low end. The roll-off isn’t high up enough in the frequency band to be a bother for anything other than playback – just enough to give you a bit of extra headroom in the frequency band which is actually useful for monitors. On the basis it reflects the way I EQ monitors, I’d say it’s pretty sensible.

Really I think the MAX will be most at home on big stages and the only thing it couldn’t single-handedly cover would be drum-fill. But let’s be realistic – it’s a single 15! Our studio has kind of a low ceiling and my suspicion is that taking the interactions with this out of play I could have got even more level out of the box. My only real gripe is the metal grille – it seems a bit weak, flexing on it when I pushed it with both hands. I didn’t try jumping on it, but I contend that there’s a guitarist somewhere out there who will.

Despite my best efforts I couldn’t activate any clip or limit lights on the D6 amp. While it’s not the most polite wedge I’ve ever encountered, I really do like the MAX monitor a lot. I’m especially a fan of the way it holds up well even with a bit of distance on it. Ultimately, short of being stood upon, it certainly stands up to every test I can think of.