Kali Audio uses the coaxial design of the IN-8 to create a smaller monitor with outstanding clarity and precision.

I have reviewed more than my fair share of studio monitors in the last 18 months but the excitement of unboxing a new pair never wears thin. Like gazing at a majestic view from a new vantage point, I think what excites me is the way a good pair of studio monitors can lend a familiar set of tunes a refreshingly different sonic perspective. Maybe it’s the possibility of being wowed with details I haven’t heard before, or the anticipation of playing my favourite reference tracks through them, or just the visceral satisfaction of hearing music reproduced accurately.

Today, I am tearing apart the box for the Kali Audio IN-5. If that name is new to you, it shouldn’t be – the young Californian company established by former JBL employees has gained loads of street cred for making serious studio monitoring. My first encounter with Kali Audio was reviewing the LP-8 eight-inch monitors last year. While the LP-8 was a great-value monitor, a quick Google search shows most of the online hype revolves around the IN-8 eight-inch monitor from Kali’s IN Series. What’s now sitting on my desk is the five-inch version of this respected model.

Like the IN-8, the Kali Audio IN-5 is a three-way monitor made up of a five-inch woofer and a coaxial four-inch midrange driver and one-inch soft dome tweeter. A front firing bass port sits underneath the drivers. Crossover points are at 280Hz (LF to midrange) and 2.8kHz (mid to HF). Powering all three sources is a tri-amped Class-D amplifier pushing 80W to the woofer, and 40W each to the midrange driver and tweeter. While we’re talking numbers, stated frequency response is 47Hz–21kHz (±3dB) and maximum peak SPL is 115dB at 1m.

The IN-5s are taller than I expected and properly dwarfed the five-inch two-way monitors usually on my desk. Each weighs 8.4kg and takes balanced TRS and XLR inputs, and an unbalanced RCA input. A blue LED on the front indicates power.

Onboard DSP handles the built-in limiter, crossover, boundary EQs and HF/LF trim. The six boundary EQ options are selectable via dip switch configurations on the back on each IN-5 and cover basically any mounting possibility:

A ±2dB high and low shelf trim can also be adjusted with the dip switches. The final switch engages the RCA input. 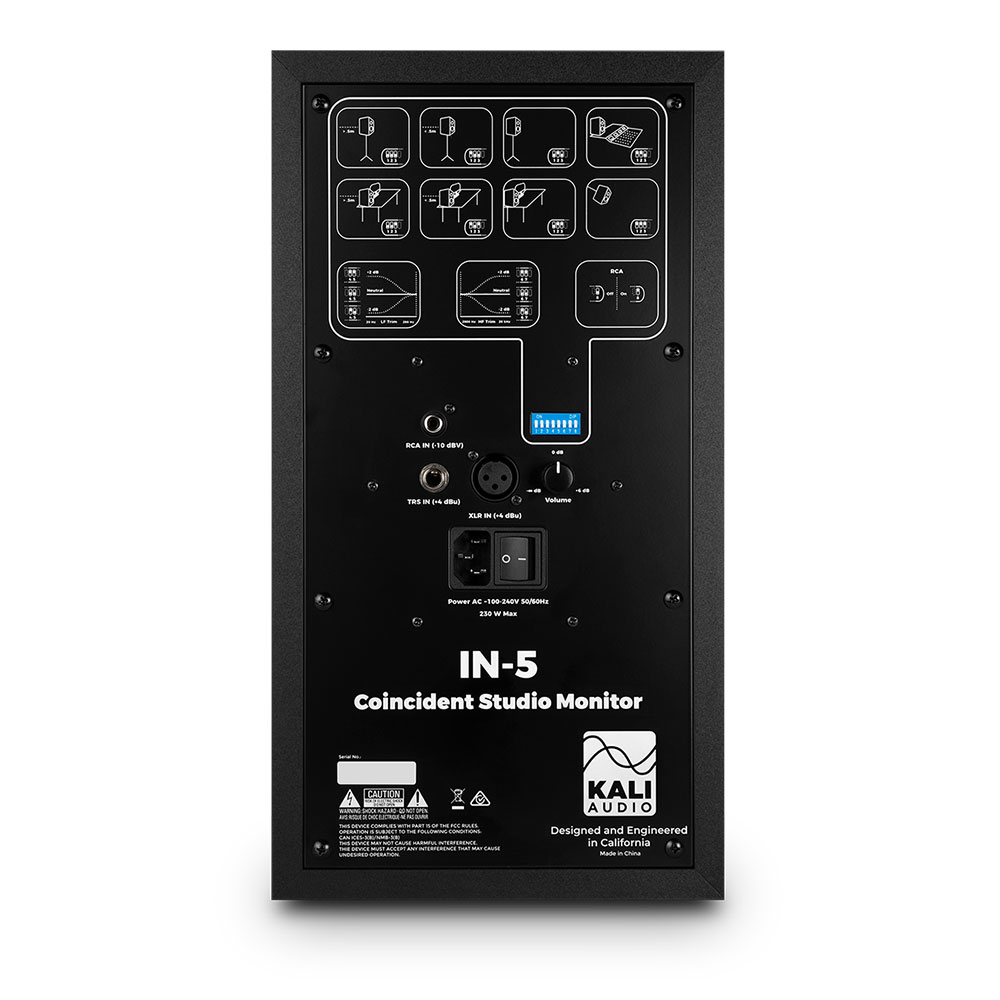 The coaxial design of the IN-5’s mids driver and tweeter is what makes this monitor special. Essentially, all material above the 280Hz crossover frequency emanates from the same point source. This works wonders for phase coherency in a crucial chunk of the frequency spectrum, which in turn dramatically improves spatial imaging accuracy.

In use, it’s remarkable. Monitoring in mono sounds like a pair of IN-5s collapse into a single phantom speaker sitting between them. Break out a mix to stereo and the clarity across the horizontal plane is incredibly precise. One way of knowing this accuracy can be credited to the coaxial mids and tweeter is how audibly the most solid imaging sits higher in the vertical sound field. The tight phase coherency of the point source design lends the IN-5 a ‘togetherness’ in tonal character; a firm, glued-together, assertive presentation of material.

The IN-5 is a forward-sounding monitor with plenty of ‘smack in the face’ punch. Upon first listen I was hard pressed to identify any ugly bumps or dips in the frequency range although the highs seemed to open up slightly after several hours of break-in time.

The tweeter beautifully balances speed and purity. Percussion and other transient sounds feel authentic and snappy while cymbals, strings, and other treble-rich content isn’t overblown. The HF boost is helpful should you need a little extra definition up there. As for bottom end, a five-inch monitor naturally won’t have the low-end presence of an eight-inch but you may be surprised how little you miss the big boys after switching them out for a pair of IN-5s. What they lack in grunt they make up for in clarity.

The IN-5 sounds very neutral, which is obviously always the goal for any studio monitor, but it’s genuinely difficult to assign it a tonal character. And this is the struggle of reviewing studio monitors – using all manner of adjectives to ultimately describe the absence of attributes more than the presence of them. Is the IN-5 bassy? Not really, but low end is portrayed well enough to make mix decisions. Is it bright? Not without the HF boost, and even then trebles aren’t shrill. Muddy? The low mids are quite clean actually. Piercing? How about ‘smooth’. Fatiguing? I’ve sat through five-hour mixing and listening sessions without batting an eyelid.

All that’s to say the neutrality of the IN-5 is confidence inspiring if you want an honest representation of a mix. It won’t flatter, and it won’t lie. As I compared it to a few other monitors, I felt the IN-5 has a boldness, confidence and precision about it, like pulling a blurry image into sharp focus then turning up the contrast. Weak, flabby or hazy it certainly is not.

As with every other studio monitor, pick the room and position carefully. The boundary EQ controls help negate frequency areas where build up may occur but it doesn’t excuse a lack of acoustic treatment or sitting in the wrong monitoring position. Kali Audio recommends a listening distance between 0.5-2.2m.

People had a few niggles with the first generation of IN-8s. Kali Audio has ironed out these wrinkles with the ‘2nd Wave’ models which includes the IN-5. A new amplifier reduces self noise by 12dB, the efficiency of the cone drivers have been improved, and the cabinet is constructed more durably. Internally, Kali Audio says 2nd Wave models have ‘more robust DSP’. The boundary EQ settings for horizontal positioning is a new addition and input sensitivity is 3dB lower, resulting in higher output level for the same input.

There’s lots of good news with the Kali Audio IN-5, not the least of which is how much it costs – you’ll get a pair for around NZ$1500. The accuracy and transparency of the IN-5s is akin to much pricier monitors, making that figure a real bargain. A word of advice, though: don’t buy the IN-5s for enjoyment listening. They’re too truthful for that. But if you want to get serious about mixing sound and feel ready for monitors that’ll tell it to you like it is, the IN-5s will be a faithful studio companion.