Located just 4km from the centre of Canberra, Alivio Tourist Park is a beautiful getaway spot surrounded by bushland with great facilities and lots of accomodation options including villas, cabins, motel rooms and caravan sites.

Across the site is a plethora of entertainment choices for patrons such as volleyball, basketball and tennis, a swimming pool, playgrounds, barbecues, and more.

Among the onsite facilities is a restaurant called The Verandah with an outdoor deck which seats 150+ people— an area which comes alive especially during the Aussie summer. As part of a larger renovation, Alivio Tourist Park chose to upgrade the AV of this space to heighten the audio quality throughout the space.

Better sounding background music was the primary function of the new audio system, as patrons sit in the deck area for meals or afternoon drinks. Additionally, the deck looks out over a waterpark where children can play and it was important the sound system could set the mood in this area above the ambient noise.

Higher SPLs were also needed when the 75-inch screen is used to play back big sporting events to a crowded deck, or playing movies for school groups of up to 120 students.

“It’s a multi-purpose space designed predominantly to be used by the café and restaurant, but it’s also another gathering space,” explains Jarrod McDaniel, Operations Manager at Alivio Tourist Park. “In our mind it was important to ensure sound was adequately provisioned throughout.”

Alivio’s original AV was installed 11 years ago by Canberra-based integrator Elite Event Technology. Alivio turned to EET once again to meet the brief requirements for the deck area. EET accomplished this by introducing new elements to the AV, including an updated wireless control system, whilst reusing elements from the original installation that were still functioning perfectly well for the space.

Knowing the deck area demanded more than a run-of-the-mill background music system, EET looked for a more gutsy loudspeaker that could sufficiently excite the space for movie or sports viewings, as well as spill punchy sound out to the waterpark in the summer months.

Aside from this, the initial challenge was finding a product that would fit into the deck’s ceiling design.

“The only place we could mount speakers was in between aluminium tracks in the ceiling where all the lighting is,” explains Darren Russell, Owner & Managing Director at EET. “The rest of the ceiling has these insulated panels without any cavities or load bearing above.”

This ruled out a quick fix of circular ceiling speakers, which also may have struggled to provide the SPL the client was after. Thus a more creative solution was required.

With these considerations in mind, EET picked the inDESIGN iD-BGM6 weather-resistant loudspeaker with a six-inch driver and one-inch dome tweeter. Not only does the iD-BGM6’s profile fit neatly between the ceiling tracks but, with 12 of them surface mounted and facing straight down to fill the space, the cabinets collectively deliver powerful bass response and smooth coverage in every spot on the deck.

Thanks to the unique mounting solutions, the power and punch of a larger loudspeaker greatly benefitted the space over a more conventional ceiling speaker option. “By the time you add bezel width, we’d have been restricted to no more than a four-inch ceiling speaker trying to fit within the aluminium tracks,” explains Darren. “Whereas with the six-inch bass driver in the iD-BGM6, and 12 of them, there’s loads of power there.”

Additionally, EET installed inDESIGN EZ8-15MK2 and EZ5-10MK2 ceiling speakers in another smaller adjoining deck area which overlooks the pool. All peripheral areas, such as the bathrooms and lobby, were fitted with inDESIGN loudspeakers too.

Because Covid-19 affected Alivio Tourist Park’s busy summer period, the system mostly hums along at background music levels for the steady trickle of customers passing through. Although, even at low levels, Jarrod acknowledges the benefit of speaker quality and quantity.

“The advice from Elite that we were happy to follow was to put in more speakers than we need,” says Jarrod. “You’d rather have 12 speakers on quietly across the whole deck rather than six up at a higher volume. And based on the background music we’ve had, it sounds lovely.”

“They are tickled pink with the result,” says Darren. “inDESIGN is our go-to value for money product in terms of performance vs cost. The deck area with the 12 inDESIGN loudspeakers goes so hard we actually limited how much power was available in the DSP because Alivio management wanted to make sure staff can’t blow it up or go too over the top. But we have plenty of headroom and when the manager first pushed the fader up, the look on his face said it all.” 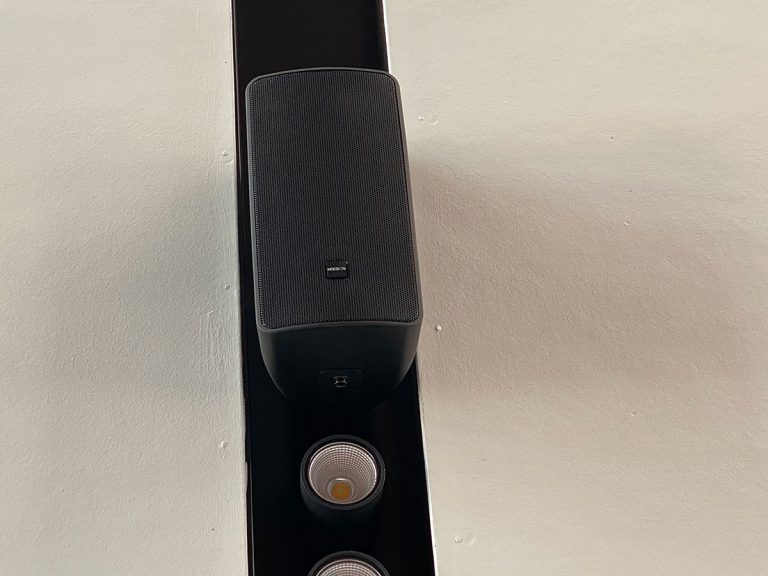 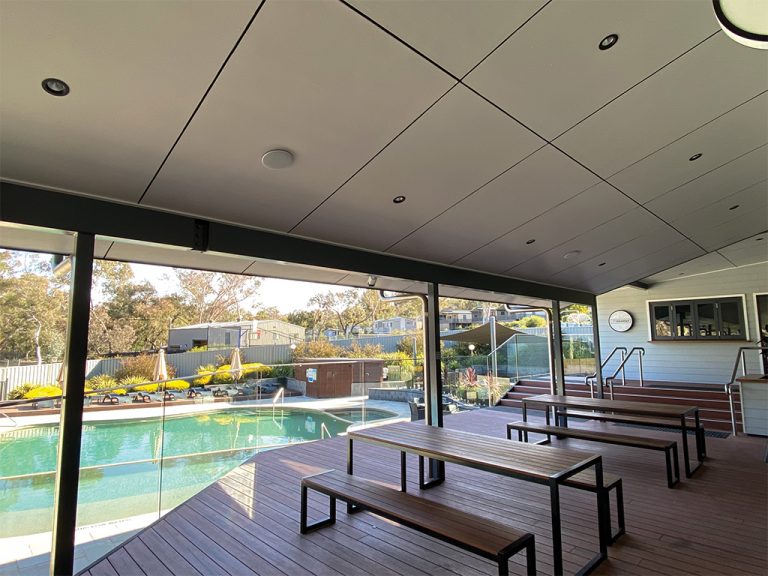 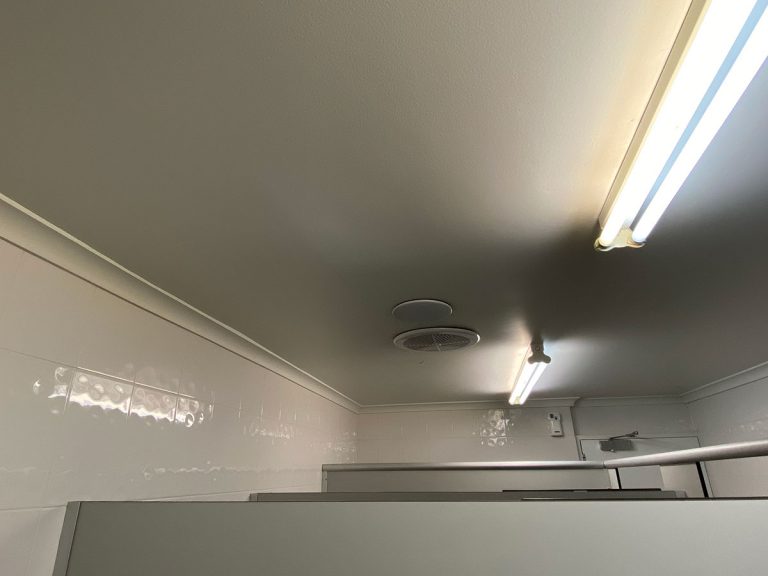 Further information on the full inDESIGN range can be found here. 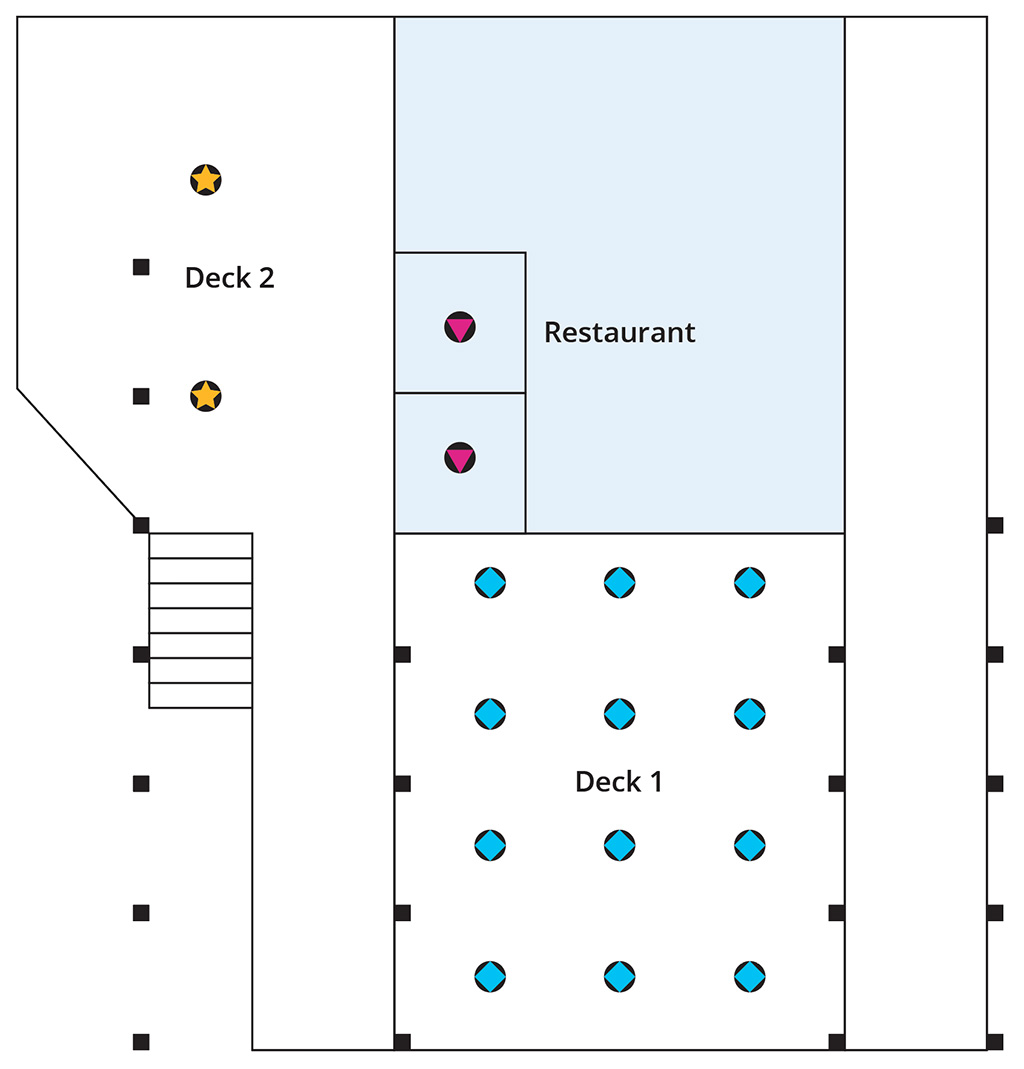